The Mystery Source bringing you TWICE as much Traffic as Facebook 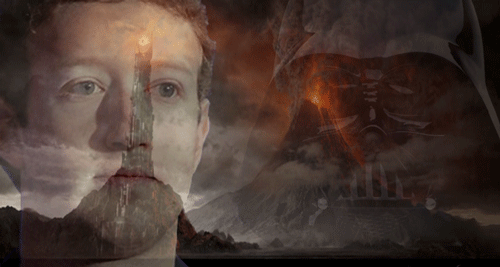 It's been a month since the Senior The Atlantic editor and probable six-pack model, Alexis Madrigal, uncovered an uncomfortable fact:

More than half of the Social Media world is completely invisible to us.

That's right. Facebook, Reddit, Twitter, etc. are only half of what's out there. The rest Madrigal calls "Dark Social" (which makes my inner nerd clap with glee). We can't measure it, but we know it's there because we see its effects -- and it's huge.

There's been some debate on the topic. So let's clear up what Dark Social is and what it isn't.

What Social Really Is

Wikipedia would have you believe that the Social Web started in 2003 or 2004 when social platforms like MySpace and Friendster formed.

But it's wrong. The Social Web existed long before with things like simple email and instant messenger.

Wikipedia's mistake is an easy one to make, because social platforms give sharing a measurable structure. We know Facebook has about 300,000 users. We know your cat photo got 200 likes. We know Facebook is controlled by a dude who -- I can only assume -- resides in Mordor.

But rather than creating the social web, social networks merely illuminated a part of something which already existed, much like a black light on your new dorm room.

When a user clicks a link on a social network or in search results and goes to a website, the visit is bundled with the message "from Facebook" or "from this keyword search". But over half the time when people visit a site, they just arrive unannounced. You don't know where they came from, but only that they're on your turf poking around.

These are called "direct hits" -- like when someone manually types in a familiar webpage or hits a bookmark. They're not social. Anyone can decide it's time for cat pics and type "www.catphotos.lol".

Grumpy Cat accounts for an estimated 78% of all social traffic.

More complex, "long-string" links, however, should have referral data, because no one types "www.catphotos.lol/giantpicturepile/1123458/omgfluffy.jpg" ... right?

Right. Except that half of these "long-string" links don't actually have any referral data, like they should. They're still being shared -- socially -- but in a way that's not measurable.

Conclusion: When you look at social metrics you're only seeing half of the picture.

The other half is Dark Social -- eg. someone arriving on your blogpost without typing in the URL and without bringing along referral data from another website. In this case, your blogpost must have been shared the old-fashioned social way. Alexis explains:

On the one hand, you have all the social networks that you know. They're about 43.5 percent of our social traffic. On the other, you have this previously unmeasured darknet that's delivering 56.5 percent of people to individual stories. This is not a niche phenomenon! It's more than 2.5x Facebook's impact on the site. 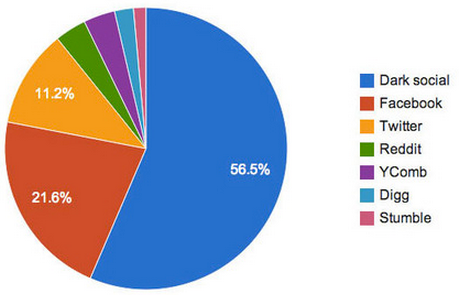 (via The Atlantic social data)

Enter Buzz Kill. Displeased with how much fun everyone has been having with Dark Social, Buzz Kill decided to look into it. In their report, "There's Less 'Dark Social' Than Meets The Eye", BuzzKill argues that Dark Social isn't really a big of deal because you can sort it into manageable chunks.

Bummer. But despite trying to ruin an otherwise good time, BuzzKill did have some interesting findings on Dark Social traffic:

Most important of all was this tidbit:

[T]here is a huge correlation — 95 percent, to be precise — between regular social and dark social traffic. If a story or site gets one, it will get the other.

For each socially referred hit a link receives, it gets another Dark one.

What This Means for Us

Basically, it means there's not much difference between Social and Dark Social. You might not be able to see half of what's going on out there, but it doesn't really matter. What you can see is indicative of what you can't.

In other words, we're not looking at an iceberg -- we're looking at a pie chart comparing the number of left hands with right ones.

So social success is social success. Dark Social might be more nebulous than what they're going to do with all those left-over Twinkies, but you shouldn't fret about it. We don't need to change our social media strategies as long as we're producing good, shareable content.

If someone's sharing your cat photo on Facebook, then someone else has probably already emailed it or shared it on Skype chat.

So pat yourself on the back, you social media expert, you. It's likely you're doing twice as much as you thought you were.