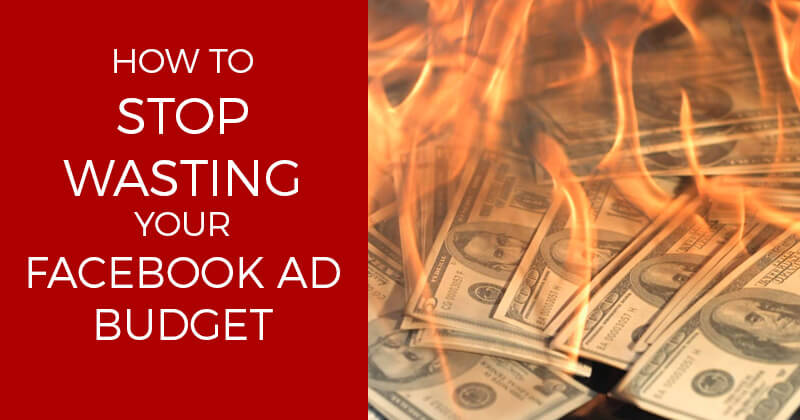 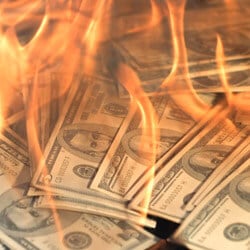 Are you uncertain about how much money you should spend on Facebook ads?

This article will settle the question.

We'll need to use some basic math, but nothing you can't handle.

When we've finished, you'll know how to create a Facebook ad budget with confidence and clarity.

I'll illustrate the entire process with an example from a Facebook ad set. We'll work backwards to derive your overall campaign budget.

This is the most important step when calculating your ad budget.

Because with TANGIBLE goals, you can find out how much is a practical amount to spend to achieve those goals.

It’s not just good for you, but helps your company make management decisions (like how much money to allocate to Facebook marketing next quarter).

Here are some examples of potential Facebook ad campaign goals:

For the sake of our discussion today, I will use the 1st example to show you how to calculate your Facebook ad budget.

When I say work backwards, I mean you need to start at the bottom and move one step at a time backwards in your conversion sequence.

Let’s say you want 300 product sales from your campaign. What is the step before making the sale?

Let's say it's generating leads. If your estimated conversion rate is 30%, that would mean you need about 1,000 leads to hit the goal of 300 sales.

When we talk about Facebook leads, we’re actually talking about email list subscribers. To target the people on these email lists, you should make use of Custom Audiences.

To generate leads, you should include a link in your ad to a dedicated landing page or a page on your website that can attract people to sign up with their email addresses.

There are many ways to get those leads (list subscriptions), such as offering an eBook or a report in return for the email address. Since this isn’t the topic for today, I will not explain further.

Ideally, you should work backwards ALL THE WAY until you arrive at the top of your Facebook marketing funnel.

Some marketers prefer to use Facebook ads to target people and try to make the sale directly. That’s possible, but ineffective in the long run -- as Jon Loomer has long maintained.

Instead, I use the simple but proven sales funnel for Facebook: Relevant Facebook users > Fans > Leads > Customers

Working backwards all the way, I end up with several ad campaigns:

I will focus on only the 3rd campaign from here on, but you need to repeat the same process for your other campaigns before you can arrive at an overall ad budget.

How big of an audience do I need to reach on Facebook to gather 1,000 leads?

Since I can't control how many times my ads are served for each person, what could be a good ad frequency to close more sales?


This is when setting boundaries and estimations becomes important:

How long will I run this ad campaign?

The important thing you need to know is that you SHOULDN’T be using the entire length of your marketing campaign here, but instead, just how long you intend to run this SPECIFIC part of the campaign. 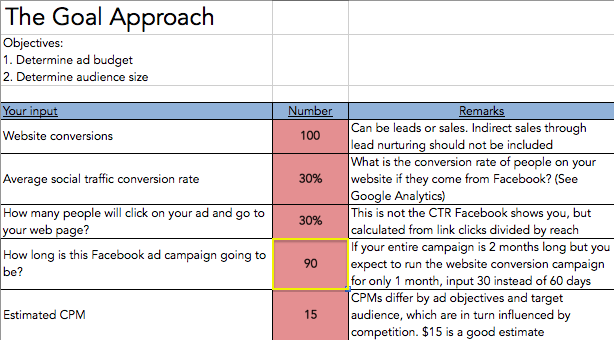 The red patch is where you should insert the numbers pertinent to your own situation.

For this example, I used the conversion period of the campaign (total time minus the time allocated to generating likes and leads) as the campaign length.

How likely is it that my target audience will be on Facebook at least once during this campaign?

Once you know how long you will run your website conversion campaign to turn leads into sales, you will need to estimate the likelihood of your lead being on Facebook at least once during your entire ad campaign.

If you’re running the same website conversion campaign and you intend to leave an ad set running for 3 months, you can probably expect 99% of your target audience to be logged in to their account at least once.

Here is a table with estimates of the proportion of your audience who will be on Facebook at least once during periods ranging from 1-90 days:

If you know your audience well, then you can change these percentages to better suit the profile of your target audience.

How likely is it that Facebook will serve my ad to the target audience?

Some of you are probably ahead of me and are thinking whether Facebook will actually show your ad to your target audience when they are online.

This is getting down to the very fine details of how an ad campaign works. It’s good to think about these issues and realize the limitations of ad planning, but for the sake of calculating your ad budget, you should probably ASSUME that Facebook will definitely show your ad to your target audience when they’re online.

If you’re uncomfortable with this assumption, then you can use a percentage you ARE comfortable with, as long as you can back it up with sound reasoning and explain the assumption to your management team or client.

Just remember one thing: The lower the probabilities of your target audience seeing your ad, the higher your ad budget will be.

Before I move on to the next step, note that I am using the following figures for this example:

Will my 1,000 leads be enough? Probably yes -- if you’re running the campaign for 3 months.

In general, the shorter your campaign, the more leads you’ll need.

The same principle can be applied to the other 2 campaigns as well:

To calculate your target impression count, you need to make use of ad frequencies.

What is the average ad frequency given the length of my campaign?

I hate to break it to you, but there are limits to what the average advertiser can do to control ad frequencies on Facebook.

Using the bidding option “Daily unique reach” will allow you to limit your ad frequency to 1 -- but there are no other options beyond that.

As a result, setting an estimated average frequency is ABSOLUTELY NECESSARY to calculate your ad budget.

I’ve set up a simple table with average frequencies that I often see associated with the length of my campaigns.

These numbers may differ for you, but since we’re only using them to derive a reasonable ad budget, the exactness of these numbers is not as important as having a satisfactory explanation to back them up. To continue with this example, let’s say that for a 3-month long campaign, you could be looking at an average frequency of 10 to 15 displays per lead.

NOTE: Some of you might see a lot lower ad frequency for the same duration, especially when you have a huge audience size.

For example, instead of targeting 1,000 people in the actual campaign, your campaign might target 100,000 people.

This will lower ad frequency significantly, which is why I'd advise you to keep your audience size for each ad set as close to the ideal audience size as possible.

Now that you have a target ad impression count, you need to know how much these ad impressions are going to cost you.

To do that, you’ll need to know the CPM (Cost Per Thousand) of reaching your target audience.

If you’re running a campaign for website conversions (like in this example), then $10 CPM is a good estimate to start with.

If you’re running Page Like ads, I would suggest that you use a $30-40 CPM, because that’s how much they cost -- especially if you’re targeting people in the United States.

In the template shown, there's a box where you can enter the estimated CPM. Again, it will vary according to ad type.

6. Calculate the cost per ad set

We’re now at the final step of the ad budget calculation process.

To know how much it’ll cost you per ad set, you simply need to multiply your target ad impression by the estimated CPM, and divide by 1,000.

That's too high for calculating an ad budget.

The truth is that you should expect a much lower conversion rate -- in the region of 5 -10% -- since not everyone who sees the ad is going to click on it.

You can quickly see that I’ll need more leads to compensate for the lower ACTUAL conversion rate, which translates into more impression counts and a bigger budget for the ad set.

I segment out the estimated combined conversion rate as follows:

And that changes things considerably!

7. Sum them all up to find your overall ad campaign budget

Throughout this article, I’ve been talking about ad budget at the ad set level. That's because Facebook marketers need to calculate and allocate ad budget based on each ad set.

So what do you need to do in order to calculate your overall campaign budget? You can simply repeat the steps above for each ad set, then sum up all of the costs to arrive at the final campaign budget.

In our example, we've been looking at the product sales (website conversion) campaign section ONLY.

As stated earlier, if you’re running an entire Facebook sales funnel, you might have 3 or more campaign sections:

That's why you need to repeat the entire process for each objective.

Facebook marketers repeatedly come to me for info about how they should calculate their Facebook ad budget.

I hope this article helps you better understand the process for yourself.

Once you break it down into steps, determining an ad budget isn't all that complicated -- right?

A logical, mathematical approach is important because you want to be able to account for every single dollar you spend in the company.

Let me know via the comment section below if you have any questions or feedback.