Facebook Just Asked Me If Businesses are Ruining My News Feed 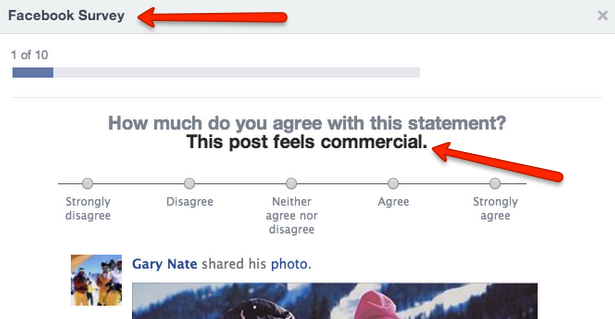 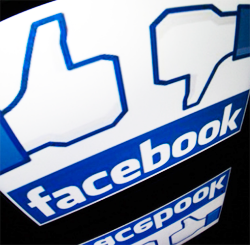 Facebook asked me today whether I think businesses have ruined my news feed.

OK, that might be stating it a bit too strongly.

It was a survey posted at the top of my page.

The survey showed all kinds of updates & asked me to rate each one based on whether each post "feels commercial".

Like you, I've read all sorts of stuff recently about Facebook reach, the news feed & whether the posts I'm shown on Facebook are getting too promotional.

With changes to Facebook's news feed algorithm, businesses worry that fewer fans will see their posts unless they pay for ads from Facebook.

Users counter that Facebook has become too commercial -- a "pay-to-play" marketplace where big corporations can now force their promotional posts into my news feed by simply writing Facebook a check.

Facebook was not originally created to be a company. It was built to accomplish a social mission -- to make the world more open & connected.

Judging by the tone of today's survey, Zuckerberg might be worried that Facebook is losing its cool.

In this article I will present images from the survey -- and screenshots of a few other posts Facebook asked me to rate.

If Facebook hasn't asked you to take the survey yet, just follow along with the images below & tell me in the comments whether you think any of the posts are too commercial.

Facebook Just Asked Me If Businesses are Ruining My News Feed

First, I should explain the rating scale.

How much do you agree with this statement? This post feels commercial.

Then things really got interesting.

I was shown this photo that was posted by a friend: 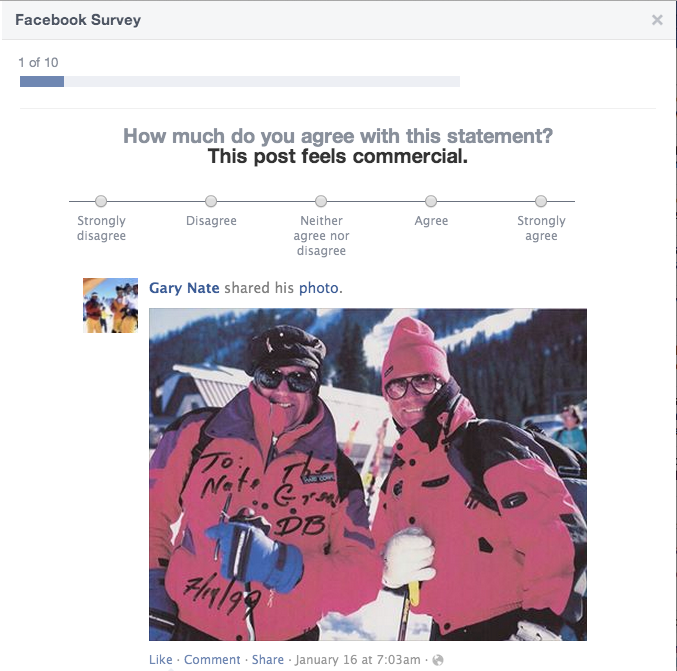 Does it feel commercial? I don't think so. It's a photo of a couple dudes skiing. 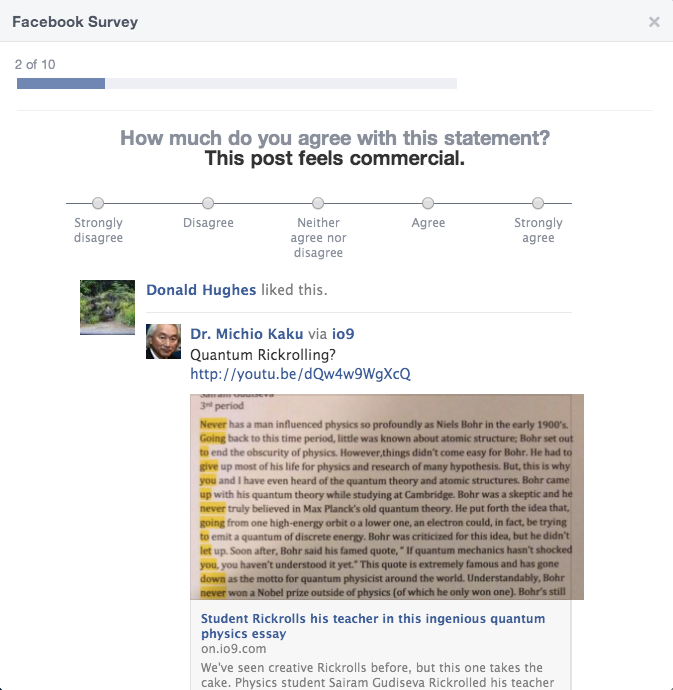 I don't think that one feels very commercial either.

Personally, I'm not bothered when Facebook shows me that others have Liked business pages.

In fact, I kind of like it -- and I sometimes even Like those pages when they're endorsed by friends.

But this might be where some people think businesses have paid to take over their news feed updates. 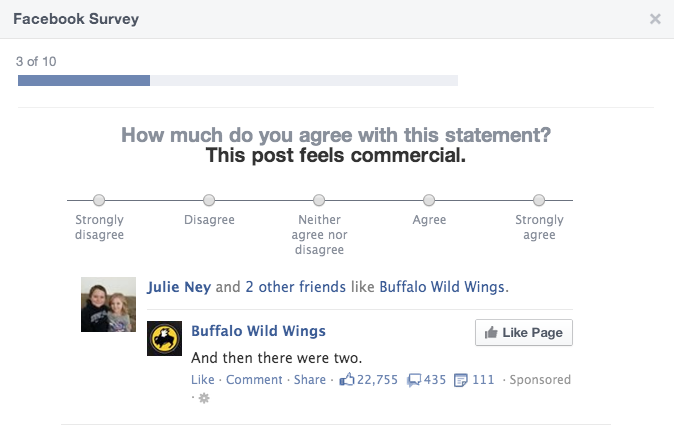 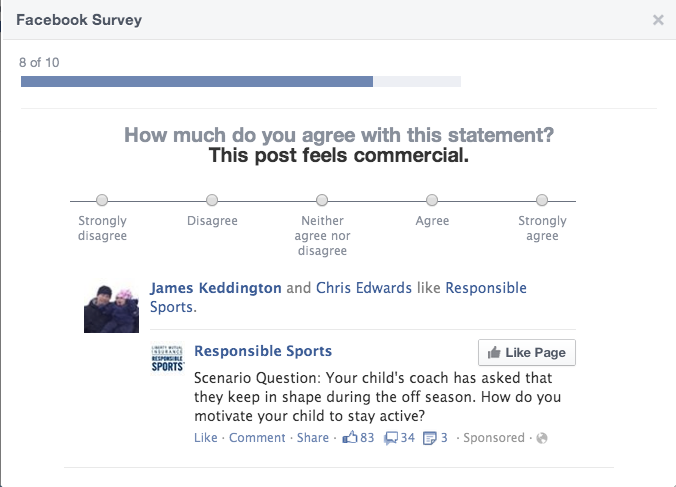 Is it all downhill from here?

This is where things start to get dicey.

When a business pays to sponsor a post to increase reach on Facebook -- items begin showing up in my news feed from pages that I haven't Liked.

Marketers realize that this is how Facebook makes money -- from advertising!

But average Facebook users are left wondering how this stuff ends up in their news feed when they haven't Liked the business.

When it comes to improving the news feed experience, how users view sponsored posts may be one of Facebook's biggest concerns. 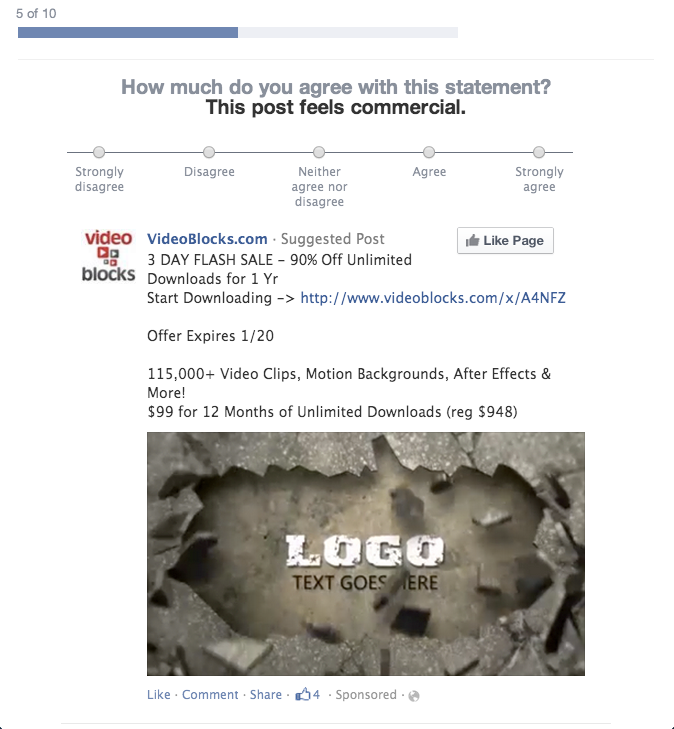 No offense VideoBlocks.com, "Appearances" Beauty Salon or Arizona Summit Law School, but I don't Like you on Facebook. Never have. :)

So why am I seeing your posts in my news feed?

Sounds like others who haven't Liked you on Facebook also wonder why these sponsored posts show up in their feed. 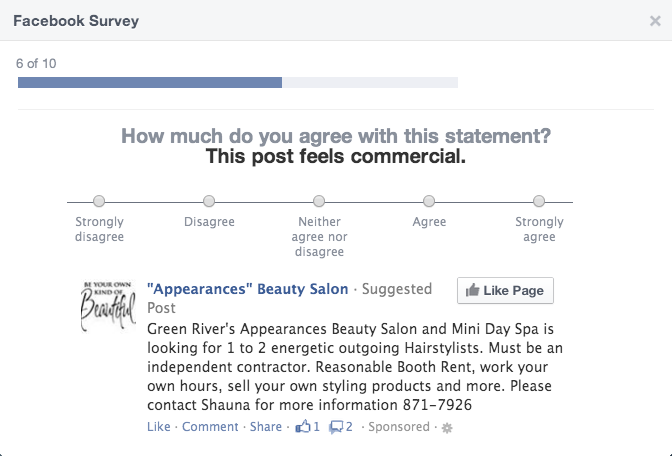 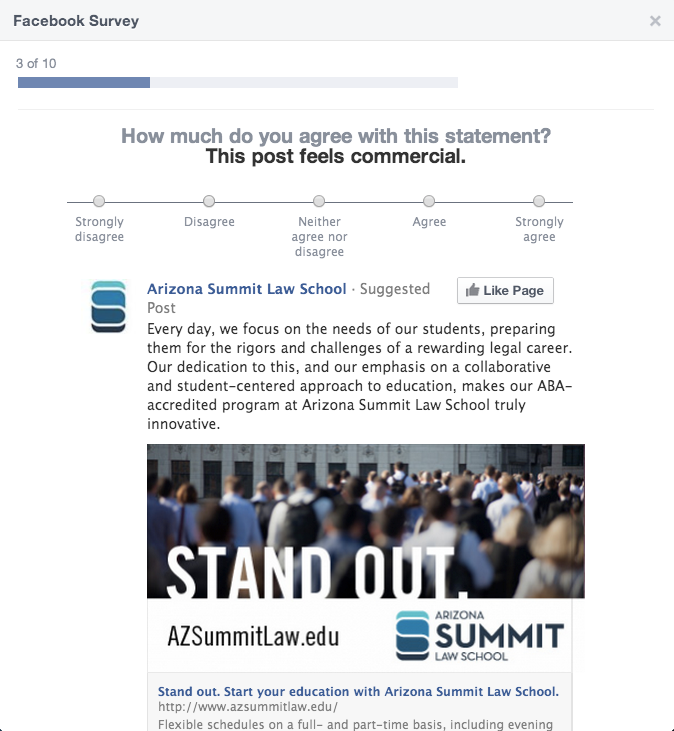 Facebook wants me to rate status updates from friends?!

A sponsored post seems like an obvious complaint from someone concerned about ads taking over their news feed.

But the survey questions below asked me to rate a couple status updates from... friends! 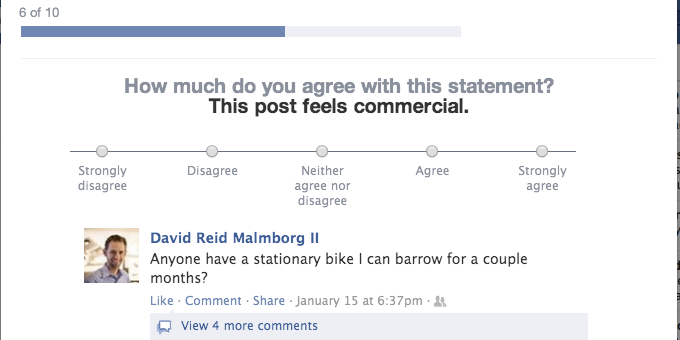 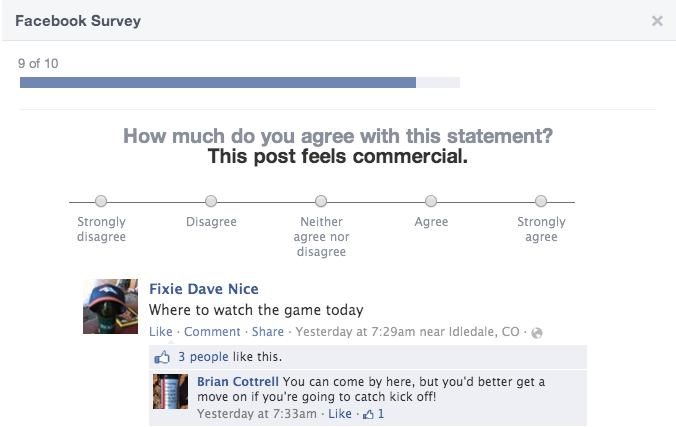 Hmmmm... yeah, that caught my attention, too.

And does this status update (from a friend of mine on Facebook) seem commercial to you? 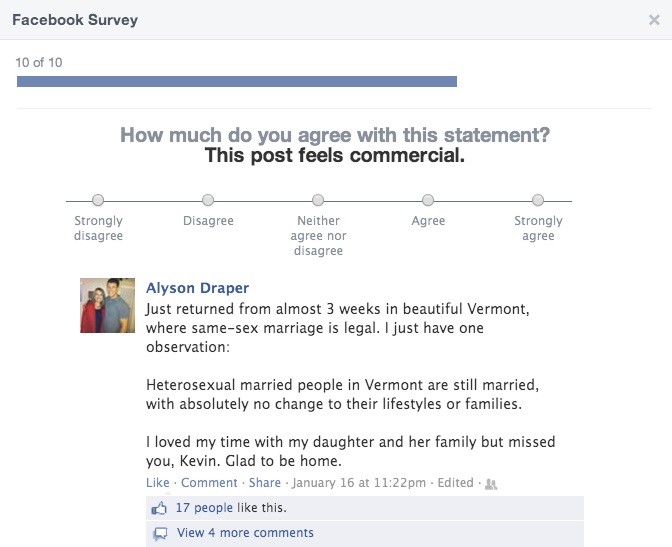 So why is Facebook asking me about these kinds of posts?

I also don't think a post that shows me when a friend connects with 4 other people is commercial (but Facebook asked me about this one, too): 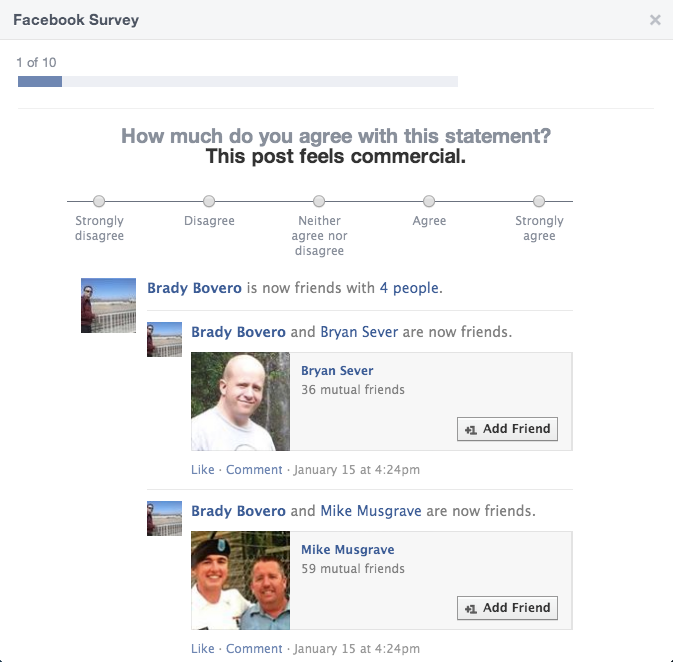 Are advertisements cluttering your news feed?

Though not a full-blown advertisement, Facebook is probably concerned about how posts like the one below resonate with users.

Again, I appreciate seeing it in my news feed when a friend likes a Facebook business page -- as shown in this example: 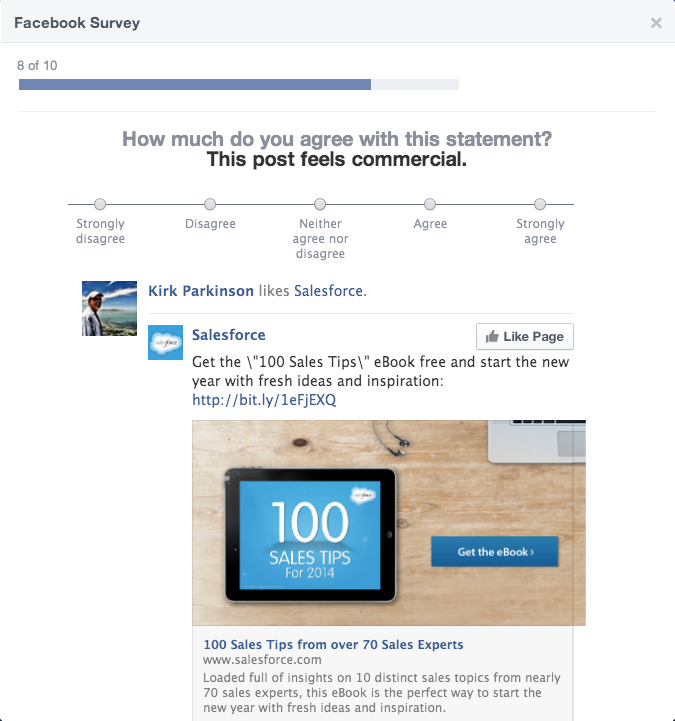 But Facebook might be hearing complaints about these & other commercial posts -- leading them to conduct today's survey.

Meanwhile, I've never Liked AirBNB on Facebook -- and judging by the survey, Facebook seems concerned that sponsored posts like the one below may have some leaving the social network for places with fewer unsolicited ads. 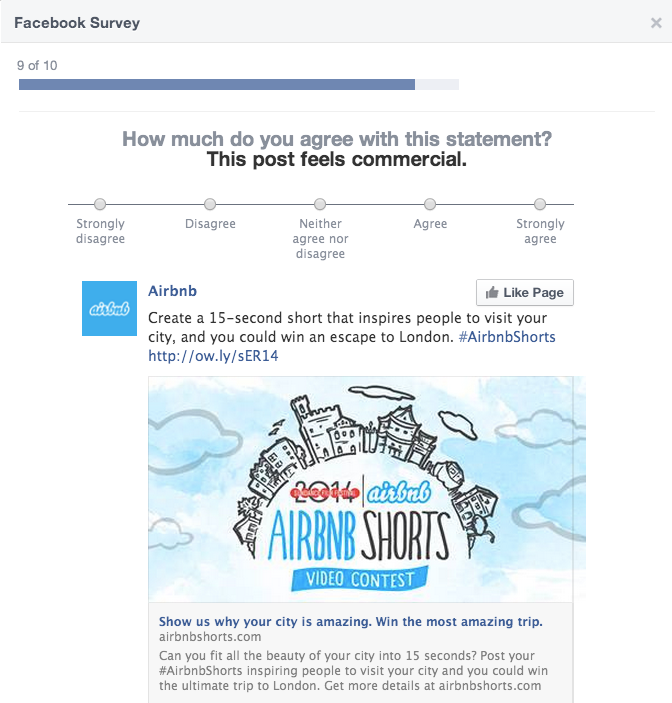 Could this report be one of the reasons Facebook asked me today whether a couple seemingly innocuous links like the ones below -- posted by people I voluntarily connected with -- are turning some away from the world's largest social network? 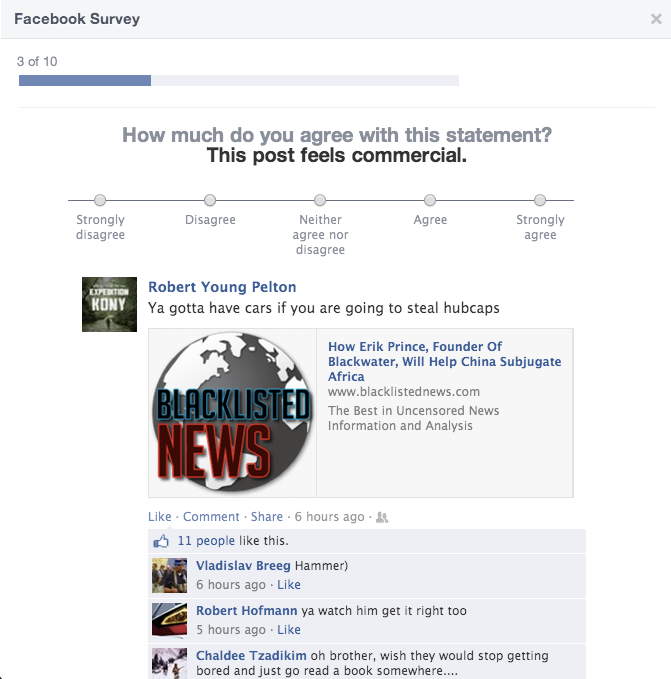 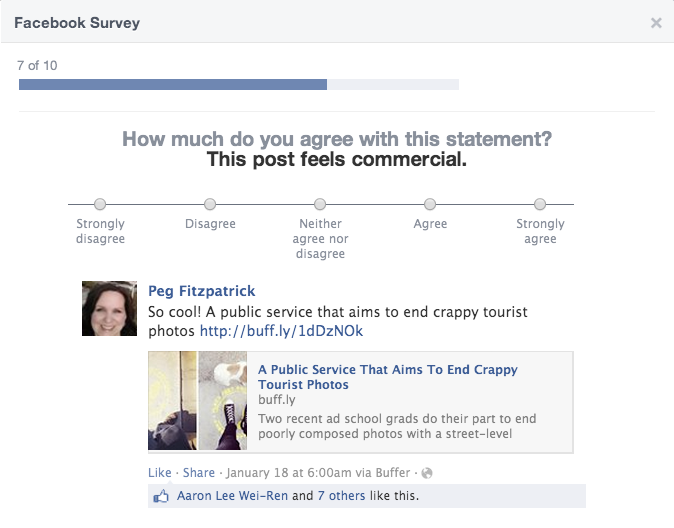 Have you been surveyed, yet?

As businesses struggle to get more engagement, and as I ponder why Facebook asked some of these survey questions, I'd REALLY love to hear from you.

Were you asked to take this survey? If so, did you object to any of the posts because they were too commercial?

If you haven't been surveyed, please provide your feedback in the comments below about the posts I presented here.

While sponsored posts carry an obvious commercial tinge, I am most interested in whether you feel activities such as a friend Liking a business page, commenting on an article or befriending others of Facebook, clutter your news feed with commercial nonsense.