Make These Mistakes with Your Facebook Contest & Get Your Page Deleted 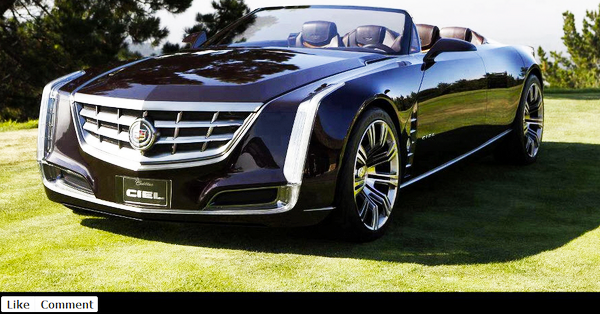 That means some of the rules listed here are no longer valid. To learn more, check out our post with reactions from 18 Top Facebook Experts on the changes.

I think it's an innate feature in our brains that we want to win contests.

I personally am a contest addict! No joke... I enter tons of radio and internet contests on a daily basis.

Most of the time I don't win a thing -- but I have actually won a few times.

One contest I won was a radio contest that you had to call in to qualify for. It was back in 2001 and I won a 50 inch Toshiba rear projector (a massive TV!), an entertainment system and a chair.

Then about a 2 years ago I entered a contest on Nick Unsworth's site and won a 55 inch Samsung HDTV!

This TV is gorgeous -- and makes watching my Dallas Cowboys lose on Sundays much more bearable. :)

Contests have become very prevalent on Facebook over the last couple years -- and are a great way to gain new fans and excite your existing fans.

But... if you run a contest, there are A LOT of rules & guidelines you MUST follow.

And yes, if you don't follow them, you run a high risk of Facebook punishing your page -- even deleting it.

(Facebook has been known to remove fan pages that violate their guidelines.)

Donna Hamer of Fan Page Competitions recently shared this with me:

People don't understand the Guidelines. So if they see "someone else is running it on their wall" they figure its ok for them to do it too.

Many Page administrations think the Guidelines are a joke -- as they don't see Facebook taking action often enough. So they're willing to run the risk of not use a third-party app aka contest app.

Pages are being shut down every single day. It's just that people don't go around "yelling from their roof top" that their Page was shut down, for fear of being seen as an idiot.

There is obviously a problem here. And I want to help.

What I'd like to do in this post is show you a few bad examples of contests first -- and then give youadvice and resources on how to run a contest correctly.

If you use Facebook to communicate about or administer a promotion (such as a contest or sweepstakes), you are responsible for the lawful operation of that promotion, including the official rules, offer terms and eligibility requirements (e.g., age and residency restrictions), and compliance with regulations governing the promotion and all prizes offered in connection with the promotion (e.g., registration and obtaining necessary regulatory approvals). Please note that compliance with these guidelines does not constitute the lawfulness of a promotion. Promotions are subject to many regulations and if you are not certain that your promotion complies with applicable law, please consult with an expert.
i. Promotions on Facebook must be administered within Apps on Facebook.com, either on a Canvas Page or a Page App.
ii. Promotions on Facebook must include the following:
a. A complete release of Facebook by each entrant or participant.
b. Acknowledgment that the promotion is in no way sponsored, endorsed or administered by, or associated with, Facebook.
c. Disclosure that the participant is providing information to [disclose recipient(s) of information] and not to Facebook.
iii. You must not condition registration or entry upon the user taking any action using any Facebook features or functionality other than liking a Page, checking in to a Place, or connecting to your app. For example, you must not condition registration or entry upon the user liking a Wall post, or commenting or uploading a photo on a Wall.
iv. You must not use Facebook features or functionality as a promotion’s registration or entry mechanism. For example, the act of liking a Page or checking in to a Place cannot automatically register or enter a promotion participant.
v. You must not use Facebook features or functionality, such as the Like button, as a voting mechanism for a promotion.
vi. You must not notify winners through Facebook, such as through Facebook messages, chat, or posts on profiles (timelines) or Pages.
vii. Definitions:
a. By “administration” we mean the operation of any element of the promotion, such as collecting entries, conducting a drawing, judging entries, or notifying winners.
b. By “communication” we mean promoting, advertising or referencing a promotion in any way on Facebook, e.g., in ads, on a Page, or in a Wall post.

Let me show you a few examples of contests that are definitely IN VIOLATION of Facebook's Guidelines -- and then tell you why they're in violation. 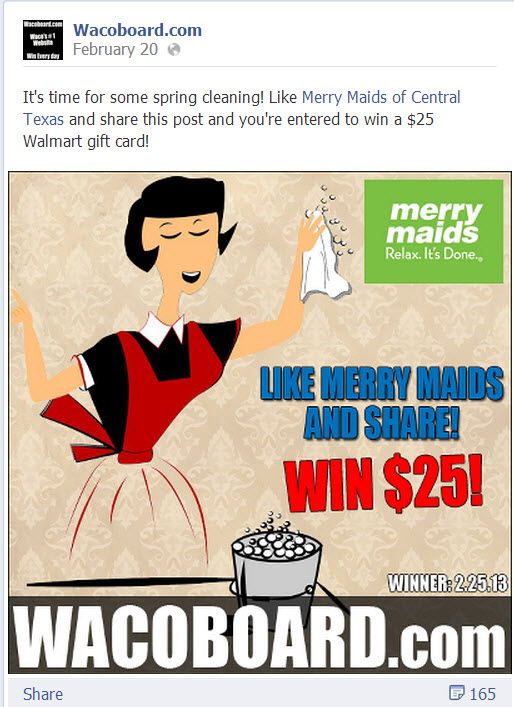 What is wrong with this contest?

What is wrong with this contest? 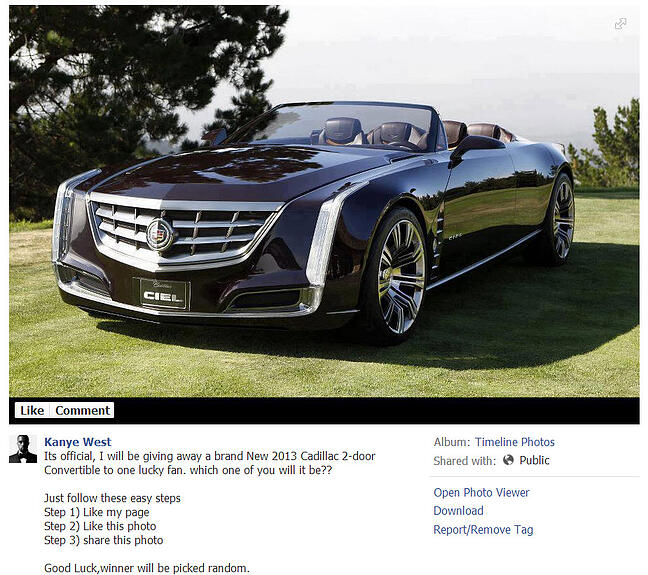 I feel like Taylor Swift should come interrupt his "contest". :)

What's wrong with this contest?

Lots of the same things as the first 2 examples.

Ok, so I showed you these 3 examples because they're the most common practices I see when it comes to running a contest the wrong way on Facebook.

It seems harmless, and perhaps it is -- but it is against the Facebook TOS and guidelines.

By running a contest in this manner, each of these pages is seriously risking the loss of their page.

Donna also shared with me a note she has created on her page listing articles to pages that have recently been shut down due to violating the Facebook Promotion Guidelines. It's definitely worth checking out.

To me, it seems like most people are running these illegal contests to try to game Edgerank.

Contests tend to get higher engagement anyway -- but by breaking FB's rules (and requiring Likes & Shares, for example), a page can gain lots of traction and show up more in the News Feed -- especially since the illegal contests tend to use photos.

And as you may know, photos get higher weight in Edgerank.

With so much competition for eyes in the News Feed, I can't say I blame pages for running illegal contests. But the risk is not worth the short term reward.

What if you had built a page to 20,000 fans and lost it because of a bad contest? You'd be pretty unhappy I'm sure. 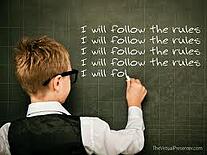 To me it's pretty simple...

It's not rocket science. You just need to take a few steps to run a legit contest -- and ensure it doesn't cause you to lose your page.

Facebook has made it much easier now to find their contest guidelines -- and short of emailing them to every page admin, I don't know what else they can do.

In any case, here's my advice on how to do it:

Step #1 Use a 3rd Party App to Run Your Contest

Facebook makes it very clear that all contests and promotions MUST be run on a 3rd party app.

This means you need to either (1) have a developer code an app for your page and then install it on Facebook and your page, or (2) use a 3rd party app provider.

I personally recommend #2 -- using 3rd party apps -- because it makes it 10 times faster to get a contest created and published.

Each of these apps functions in different ways -- and some have free plans and others don't.

I'm not endorsing a particular one here. But I wanted you to know there are lots of choices out there.

Almost all of these apps will have you design and setup a contest on their site and then connect it to your page in a few steps.

But remember -- Facebook requires you let your entrants know (1) how they can enter, and (2) how they will be notified of the winner.

And you MUST display wording releasing Facebook from the contest. (Almost everyone fails at this.)

Step #2 Give away relevant prizes.

Give away something valuable -- but also something that offers relevant value to your fans.

Don't feel like you have to give away an iPad or TV with every contest. All you'll end up getting is a bunch of new Likes that are interested more in free stuff than your product or service.

Instead, give away something related to your brand. Let's say you are a tire shop, for example, and want to run a contest. Instead of giving away an iPad, give away a free tire rotation -- or free brake checks -- or perhaps even a free tire or set of tires.

The goal is to give away something that brings in new fans who are potential customers down the road.

This seems like a no brainer, but most people don't want to pay to promote their contest.

The reality is you'll need to run ads (targeted ads) that send people to your 3rd party contest app on your page.

Sure, some people may share the contest organically -- or you might be able to simply post an announcement and get some entrants. But they will likely only be current fans.

By running FB ads targeted to potential customers interested in your product, you will greatly increase your number of entrants. Which in turn should increase your email list.

But you also need to make sure you don't use verbage that violates Facebook's guidelines when promoting.

You should also promote the contest via all of your social channels, blog and current email list.

You've gathered 500 entrants and emails with your contest and the time frame to enter is over.

Now you make a big deal about giving away the prize. Perhaps you take a video of you drawing the name out of a hat (btw, inside most 3rd party contest apps you can randomly select the winner with their software).

Instead of just choosing a winner and announcing it, why not do a live broadcast sharing your screen as you select the winner.

This not only causes more excitement but also shows that you didn't cheat and give away the prize to your grandma!

Once the contest is over and you've given away the award, be sure to get a video testimonial from the winner as they receive their prize -- and then celebrate that with your fans.

You should remind them how awesome the contest was to keep them engaging with you and to get them ready and waiting for your next contest!

Facebook contests are great -- and when you do them correctly, you can really send engagement through the roof, increasing your Edgerank and your exposure in the News Feed.

But do the contest wrong and you could be starting your page from scratch again.

If you want to learn more about running a good contest, Andrea Vahl has a free webinar you can go check out called Running a Successful Facebook Contest. Probably worth checking out.

Have you run a contest? Was it a success or a failure? Have you seen any pages getting deleted for running an improper contest?