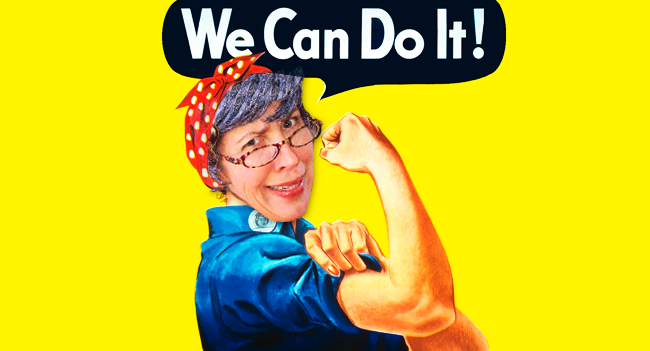 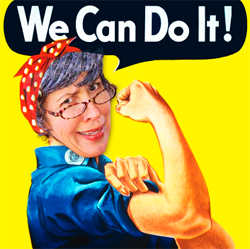 I recently wrote a post that got tons of shares:

After writing it, I realized that all 5 pages I mentioned were dudes -- or companies run by dudes.

And definitely not representative of the ass-kicking that (at least) half the population is doing on Facebook.

So I felt another post was in order to highlight the women in Facebook marketing who are crushing it every day.

If you're smart, you'll use the embedded posts in this article to Like each of their pages.

You'll thank me for it later, I promise.

If you're not following Grandma Mary, you're just plain missing out!

Andrea... errr ... Grandma Mary shares humorous & practical insights on how to use Facebook for your business.

Also, she has apparently become a world traveler of late!

And she might just be the smartest person in the room when it comes to leveraging Facebook for business.

What can I say about Kristi Hines?!

The woman seems to be on a mission to write a blog post for every major SMM, SEO & internet marketing blog on the web.

Seriously. I challenge you to name a major blog she hasn't written for!

She also recently launched her own website about how to be a freelance writer.

And, yes, Kristi also blogs for our site!

OK, so Erika Napoletano may not brand herself as a "Facebook expert", but she kicks ass anyway!

A business coach who helps people "get unstuck", she was once described by Forbes as:

a redheaded, tattooed Tina Fey with a special weakness for four letter words

If that alone doesn't make you want to follow her, then go back & read it again!

She embraced the mishap & had fun with it -- as you can see in the photo below:

Mari has helped pave the way for all of us since she jumped on the scene years ago to teach the world about Facebook & social media marketing.

Many people who do social media for a living will tell you -- they learn from Mari every day.

But Mari is always on the cutting edge of new Facebook changes & developments.

Her page has been around for years & has about 116K Likes. But her personal profile is just insane -- picking up more than 400K followers since Facebook launched the Follow feature nearly 2 years ago.

If you haven't Liked her page or followed her profile you're likely to be living under a rock!

There are plenty of other women in Facebook marketing who deserve a mention here.

But these are my top 5 to follow right now for the latest Facebook marketing & social media tips.

Your turn: Who would you add to this list?