...Video can make a significant contribution to your marketing strategy.

But many marketers continue to only look to YouTube.

That makes perfect sense, as about 300 hours of video get uploaded every minute on the platform.

But YouTube isn't the only kid on the block.

Facebook video is the best marketing tool to promote your business.

With an average of 8 billion videos viewed daily, you gain immediate access to a large audience.

Ready to expand your video presence?

If so, Facebook is your opportunity to reach a whole new audience.

Here are some awesome tips for Facebook video marketing success.

YouTube is a good venue to get some views for your video. But better than that:

This is because a video uploaded natively to Facebook is more likely to capture attention.

In fact, Quintly found that "Facebook native videos perform up to 4 times better than all other video formats." 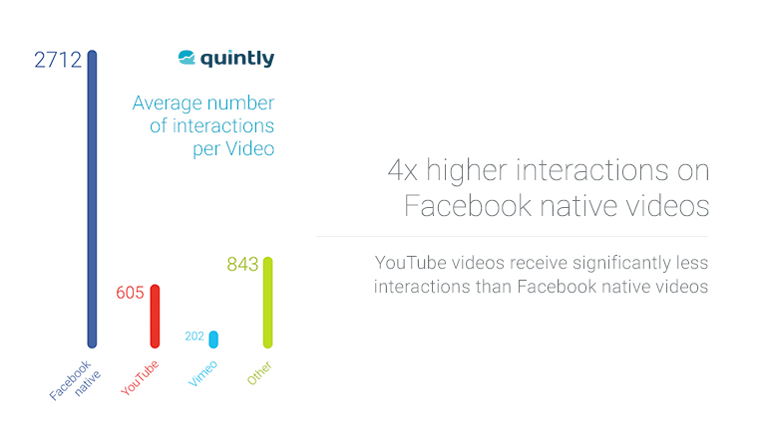 That's a big reason to begin uploading to Facebook and here's another...

That's a drop the mic type of stat. Organic reach isn't easy to come by these days.

With an opportunity like that one, it's easy to see why video has become a Facebook marketers biggest ally.

And don't forget about the auto play feature for natively uploaded videos.

This beckons users to see and watch without having to click on play. Most Facebook users tend to stop and watch at least a few seconds when a video starts to play as they scroll down.

You know you've caught yourself doing this...maybe a little too much. 😉

You can also take advantage of the view count feature. As you've seen with viral content, views are a key indicator of audience appetite.

Use this data to determine:

2. Shock and Awe Within the First 4 Seconds

Okay, maybe your video isn't exactly shocking, but it sure isn't getting your audience to watch.

What can you do?

Get creative. Use humor, share a funny joke. The point is this:

...Whatever you do, make sure it catch's audience attention in the first 4 seconds of your video – and keeps it.

It's also imporant to design your video and write your script with the drop off in mind.

What do I mean?

Vidyard found that "you typically lose the majority of your audience within the first 30 seconds or less."

That makes it critical to maximize the potential of your video.

So, make sure to show something interesting in the opening seconds of your video to keep the viewers watching.

The goal is to keep them from scrolling past it.

You have 4 seconds to do it, so make them count.

It also doesn't hurt to keep your videos short if you want your audience to watch it until the end.

Facebook rolled them out with a vision to use virtual reality as a communication and social interaction tool.

Now, with this feature in place, you can give your audience a more experiential feel of your story.

As users navigate their screens, they'll feel as if you've invited them in to whatever is transpiring in the video.

This is just like the experience ABC News and Jaunt VR did during North Korea's Worker's Party.

...They captured the historical event as Kim Jong Un watched thousands during the parade.

You can let your Facebook fans do the same.

With 360 video, viewers will be able to pan, rotate, and watch the video unfold from any perspective that they would like.

4. Feature a Video on Your Page

...That increases the popularity of your page,

Featured video can do the same.

Upload a featured video to your About section, with a thumbnail that's larger than the others on your page. 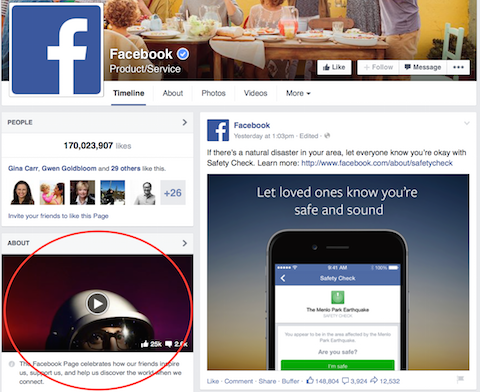 This is a good way to promote a new service or product, or maybe even tease your upcoming event.

For example, Unicef's video of the Syrian girls who became best friends in Austria was a featured video.

That makes it more likely to get clicked and played by its target audience.

5. Tell Viewers Something About the Video

Viewers will be more likely to stop and watch your auto playing video if you give them a bit of information on what to expect.

You don't actually have to explain anything...

...Just make sure it's something that will intrigue them.

The video below is currently the most popular Facebook Live video.

At a first glance it doesn't look like anything special.

So, what's the secret to it's massive success?

The video creater, Candace Payne prefaced her video with: "It's the simple joys in life..." and it is likely that most of the 3 million viewers wanted to know what those simple joys were.

So, go ahead - provide some context to your video.

Set expectations for your viewers to keep them intrigued.

From a marketing point of view, one of Facebook video's most useful features is the ability to add a call-to-action or CTA.

Getting your viewers to do something is, after all, one of the main purposes of marketing.

Many people don't know how to add a CTA to their Facebook page, although it's actually pretty simple.

In fact, the "Add a Call to Action" option will appear by itself as soon as you upload a video.

Choose from options such as: "Book Now," "Shop Now," and "Learn More."

You can also use "Watch More" to send viewers to other videos on your site.

The Facebook Live feature has finally given you the opportunity to stream live events without ever leaving Facebook.

Moreover, you can maximize its marketing potential during all stages of your event preparation.

Just like in a YouTube channel, you can group your Facebook videos into playlists to make it easier for viewer to find videos they want to see.

After all, it can be quite frustrating to search through dozens, if not hundreds, of videos on your page just to find a particular type of video.

And let's face it: very few users will actually go through all the trouble.

That's why playlists can be such a life saver.

They make it possible to narrow the search to a particular category such as recipes, DIY projects, etc.

BBC One categorizes its playlist and makes it easy for the audience to look through their videos. 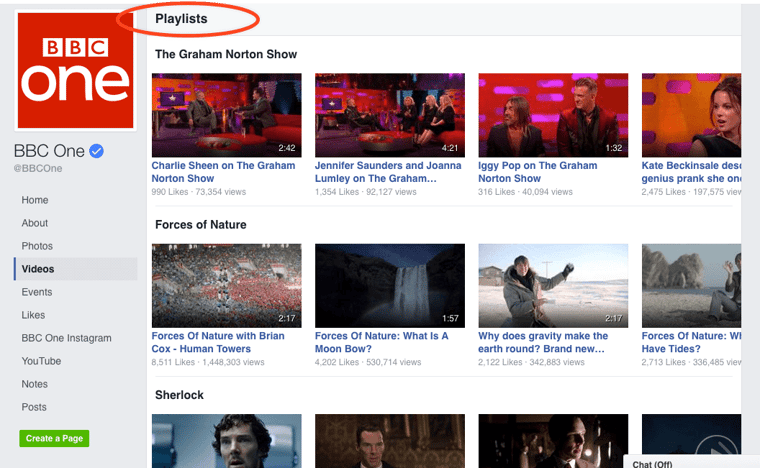 So, if a fan wants to watch videos and teasers of Sherlock, they can just jump in that playlist and and watch it.

However, with 100 million hours of video being uploaded to Facebook every day, it's easy to get lost in the crowd.

The great news is that you can give your video a bit of a boost by using an ad.

A sponsored video post will appear on the newsfeeds of users that fit your target profile, but who may not be a part of your network.

Best of all, you have the ability to target your audience based on their location, age, interest, etc

Facebook ads let you tap into a market that you may easily penetrate.

It only takes a handful of new viewers for your video to spread like wildfire... provided you have great content, of course.

Viewers see thumbnails before they see your video.

That's why it's so important to choose one that is in perfect alignment with your brand and marketing strategy.

Always give preference to thumbnails that have the potential to be a click magnet.

Remember: you have the option to choose a customized thumbnail for your video...

11. Use Facebook Insights to Analyze Results And Optimize For Your Next Video

If you want to achieve success in social media, make data-driven decisions.

Same is true for video marketing.

You want to make sure that your video marketing strategy is working.

Use Facebook Insights to get the metrics you need to assess audience engagement.

Look at the number of views, their duration, and completion rates of each video.

You can use this data to improve your videos and/or follow up on a campaign that works.

This is especially important when you do live streaming, as it can indicate what type of events or streaming videos your audience enjoys.

After all, the social network, itself, is leading the pack, so that alone makes it an obvious choice.

Did you notice how Facebook has been stepping up its game?

There's live streaming and video content capabilities that are almost too easy to use!

That's why using Facebook for your online video success is a no-brainer.