Here's How Advertisers Pimp Their Facebook Ads During the Super Bowl The Super Bowl is one of the biggest sporting events in the world.

And this year's game was the most watched Super Bowl in history!

We don't have numbers yet for this year's Facebook ad spend, but I'm thinking it was huge.

Especially since it was the first time businesses could run "real-time" ads during the Super Bowl -- and target users based on what they talked about during the game.

Some posts from your friends probably even appeared on the page. Very cool! 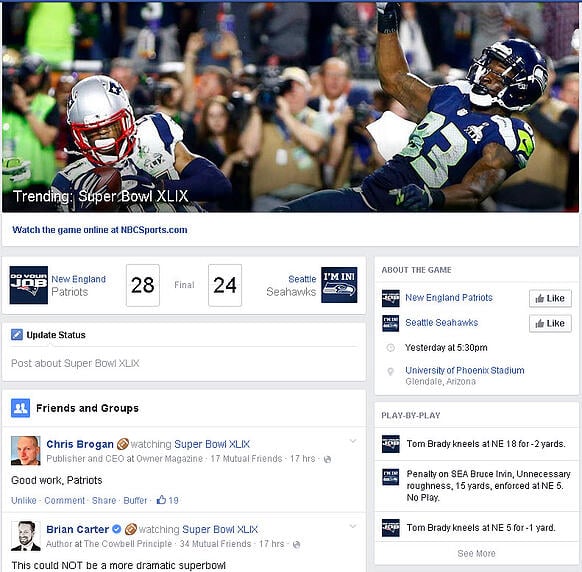 It makes sense for Facebook to leverage the Superbowl as an ad-selling event.

And I'm sure advertisers see Facebook as a more affordable way to get exposure during the big game.

So how much exactly did they leverage Facebook ads?

Here's How Advertisers Pimp Their Facebook Ads During the Superbowl

During what sporting event do businesses buy the most Facebook ads?

SocialCode did a study to find out. And I think the results might surprise you.

The Olympics went for 16 days, the World Cup for 32 days & the Super Bowl was a 3-hour affair on a Sunday afternoon. It's hard to compare ad spend for the 3.

So SocialCode examined the Facebook ad spend on a per-hour basis.

And the Super Bowl blew the other 2 out of the water!

Check out these fascinating findings before you look at the whole infographic:

Check out the infographic below for more details: