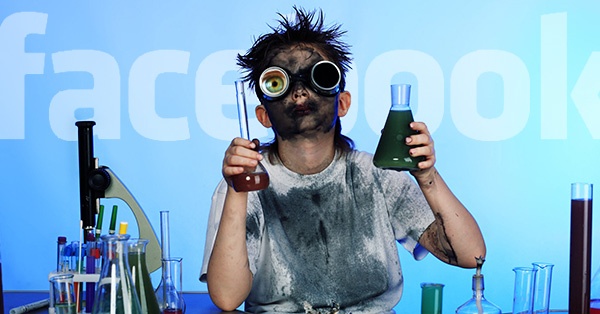 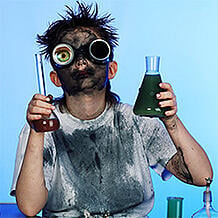 I recently did something crazy!..

I went 14 days without looking at the Facebook newsfeed.

And it wasn't that hard!... because I was on vacation with my family most of that time.

I removed the Facebook mobile app from my phone as we drove to Disney World during a 10-day vacation. And I didn't have time to use my laptop since I was busy rubbing elbows with Buzz Lightyear!

Once home, I didn't access the newsfeed for 4 more days.

My 2-week experiment depended on it! I wanted to see what posts showed up after going that long with no activity.

The only things I did on Facebook during those 2 weeks were:

In this blogpost, I'll analyze the posts that appeared in my newsfeed when I returned from my 2-week hiatus -- both in the "Top Stories" and "Most Recent" parts of the feed.

I looked for ads, friends & followers, and activity from lists. Here's what I found.

I almost always have my newsfeed set to "Most Recent" -- whether I'm using Facebook on my phone or computer.

That provides the most up-to-date posts from the profiles & pages I want to see.

When I returned to the newsfeed after my 2-week break, I kept track of the first 100 stories I saw in the "Top Stories" and "Most Recent" parts of the feed.

I don't have the dates, but here's a breakdown of the first 100 posts in the "Top Stories" part of the feed: 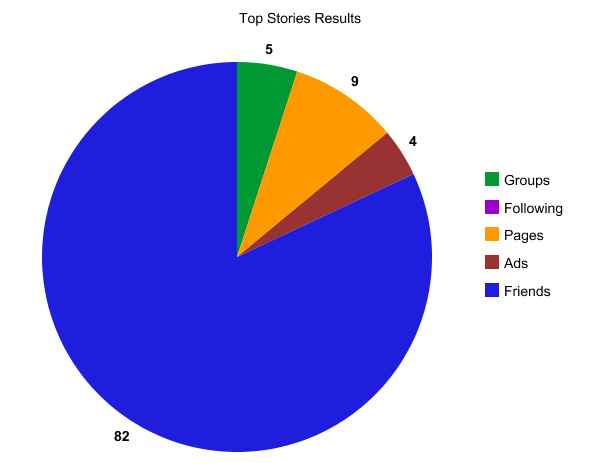 Yes, most of the posts were from friends.

I actually thought that was a mistake, so I checked the newsfeed a few minutes later. Guess what? Same results!

Only 9 posts came from pages I'd Liked.

That's less than 10 percent of the posts coming from business pages. And there were no posts from people or Interest Lists I follow!

I created a similar chart for the first 100 posts from the "Most Recent" part of the newsfeed: 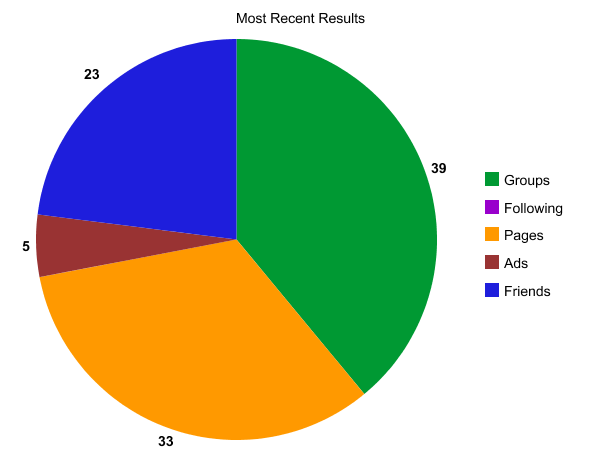 Most of these posts came from groups. About a third came from pages I Liked.

There were no posts from the people & Interest Lists I follow. And the number of ads was about the same as the "Most Recent" feed.

Of the 39 group posts, 32 came from friends posting in groups I follow. The other posts came from other group members I chose to follow in the feed.

Most of the stories from pages were about a Dallas Cowboys football game the night before. I'm a big Cowboys fan & post often about my love for the team!

Facebook must deem these stories important and "trending" for me.

One striking thing I found was that most stories from friends on the "Most Recent" feed weren't recent at all. Most were published November 23 & 24 -- when I wasn't active on Facebook.

And these posts hadn't seen much activity in days.

I wish I knew why Facebook didn't show more recent posts from my friends.

The algorithm decided instead that I'd missed stories that were popular with my friends weeks before & these posts were displayed in the "Most Recent" part of the newsfeed.

Wouldn't "Top Stories" have been a more appropriate place to display these older stories? 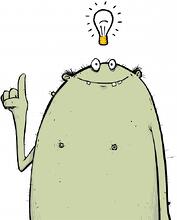 These were the most significant discoveries I made during my 14-day experiment with the newsfeed:

Facebook appears to prioritize posts from friends over posts from pages.

The "Top Stories" part of the newsfeed especially favored posts from friends.

About one ad appeared for every 20 to 25 stories. Make sure your Facebook ads stand out or they'll be overlooked in a newsfeed filled with posts from friends.

There, I said it!

Not a single post on my newsfeed contained stories from Interest Lists I'd followed.

This newsfeed experiment showed me that I should only interact with the pages & people I want to see posts from on my newsfeed.

One big-time takeaway is this: turn on the notifications for the pages, friends & groups that you want to see every time -- so you can see everything they post!

I think you'll find that you waste less time aimlessly scrolling the newsfeed & see more content from the people & pages you care about the most.